As I was profiling my WebAssembly compiler, I noticed that the runtime.convI2I function was taking up a large portion of time. The compiler's design prioritizes fast compilation over complex optimizations, and the hotspot was indeed in the code which reads input - the one part that cannot really be avoided. 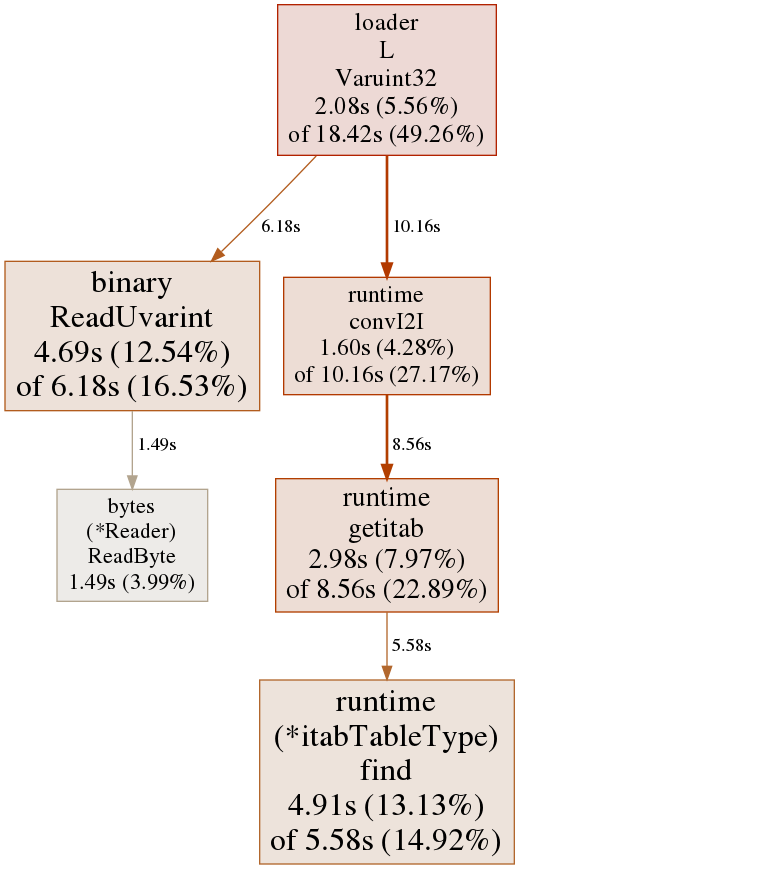 But what is this convI2I? When a Go program has an assignment or function call where an interface value is converted to another one, the official Go toolchain generates code which converts it during runtime by calling convI2I:

The source of the WebAssembly module is abstracted using a reader interface. It's one of the very few areas where an interface type is actively used by the compiler. I suppose interface conversions usually happen when some variable or struct field is initialized at the start of a routine, and that interface value is then used in tight spots without conversion. But this was different.

The input reader is accessed through loader type L which provides some helper methods. L wraps interface R which has a method set designed to be compatible with many buffered reader implementations. Some helper methods then go on to call standard library functions which take a narrower interface. As the compiler reads input a little at a time in one tight loop after another, a helper method may be doing an interface conversion at every iteration.

I went on to reimplement the problematic methods so that they no longer make function calls which require interface conversions. convI2I and the related runtime functions completely disappeared from pprof output, and my benchmark got a lot faster:

The CPU profile and benchmark were recreated for this article using Go 1.12.1.

I'm left to wonder if it would be possible to do away with dynamic interface construction without affecting method calls. If a Go compiler would do full program analysis at link time, it could perhaps construct more efficient lookup tables. But it would also slow down builds and cause problems with plugins - and probably not be worthwhile.

I suppose interface conversion overhead is not a very common issue, but this code pattern might be something to look for when optimizing.